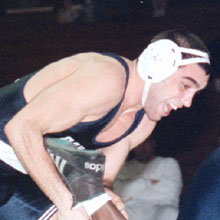 It was the 2nd time Pritzlaff would achieve All-American status for the Nittany Lions and capped a stellar collegiate career which saw him finish with 135 career victories, a Big-10 Conference Championship, and all Big-10 honors.  In addition to his accomplishments on the mat for Penn State, Pritzlaff also excelled in the classroom, being named to the Big-10 All-Academic team three consecutive seasons.

Pritzlaff's accomplishments came as little surprise to Shore Conference fans who watched him put together one of the most dominant careers in the history of New Jersey wrestling.  Pritzlaff won three NJSIAA State Tournament Championships, being named Most Outstanding Wrestler his final two years, after finishing in 5th place his freshmen year.  He also claimed four Region 6 championships and District 22 titles and finished with a record of 113 wins and just three defeats.

A member of the Middletown South and Region 6 Hall of Fame, Pritzlaff stands as one of the greatest wrestlers to ever come out of New Jersey.

Any suggestions, questions, or feedback?